XR101 Activated alumina is a filter media made by aluminium oxide and bindings which is big porous and good adsorption.

XR101 activated alumina is used as a desiccant:

It works through the adsorption process when being used as a desiccant. During this process, the water sticks to the alumina so that the dried air is passed out through the filter.

The application of other activated alumina:

XR105 activated alumina is used as a fluoride adsorbent: It is widely used to remove all fluoride contents from drinking water. It can reduce the fluoride levels from 0.5ppm to less than even 0.1ppm. Depending on how long the water is in touch with alumina, the amount of fluoride can be leached from the water. Basically, more the alumina in the filter, less is the fluoride in the final filtered water. If you do the regeneration of used activated alumina in time, it is good results and long life.

XR408 is used as a catalyst: It can also be used for various catalyst applications. It could adsorb some certain molecular of catalyst, like Pd, and other metal catalyst.

XR107 activated aluminc is used  in hydrogen peroxide production, in the production of polyethylene, as a selective adsorbent for many chemicals, including fluoride, arsenic, etc. in sulphur removal from the main gas streams.

Activated alumina is also used as a biomaterial: The non-reactivity and mechanical properties of this compound make it an ideal material for covering surfaces in friction. 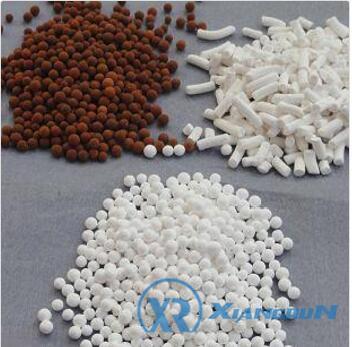